The Statement on Religious Freedom is a consensus statement of the Christian Interfaith Reference Group (CIRG).We respectfully offer it for your use in conversations about freedom of religion in Canada, and as a basis for response to any issue that challenges religious freedom. We encourage you to share it widely in your churches and with your contacts. 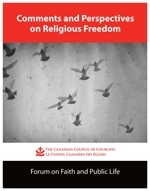 Comments and Perspectives on Religious Freedom

In the spring of 2013, Dr. Andrew Bennett, Canada’s first Ambassador for Religious Freedom, was a guest speaker for the CCC’s annual Forum on Faith and Public Life.

The forum focused on the mandate of the new Office of Religious Freedom, and Canadian church experience and expertise in this area. This publication brings together the contributions from the participants in that dialogue.
Download a PDF copy. En français.

To order print copies of Comments and Perspectives on Religious Freedom, please email ac.sehcruhcfolicnuoc@redro. Copies are $15 each plus postage.

Letter to the Prime Minister

The Canadian Charter of Rights and Freedoms names  the freedom of conscience and religion as its first fundamental freedom.

The Canadian Council of Churches representing—in its 25 member denominations—85% of the Christians in Canada, with connections  to millions of people of faith around the world, has been promoting and living this fundamental freedom of religion and conscience for nearly 70 years now.

We bring expertise to the mandate of the new Office of Religious Freedom and look forward to being consulted. We bring the wide experience of working with and being in active relationship with, all of Canada’s faith communities at national and international levels.

On the occasion of the creation of the Office of Religious Freedom and the naming of its first Ambassador, Andrew Bennett, The Canadian Council of Churches wrote to the Prime Minister.

Read the full text of the letter. [PDF] En français.

Study Day on the Office of Religious Freedom – October 1, 2012

The study day was organized in response to a request at the Commission on Justice and Peace meeting in May 2012 to discuss the pending government opening of the Office of Religious Freedom (ORF) in the Department of Foreign Affairs and International Trade (DFAIT).