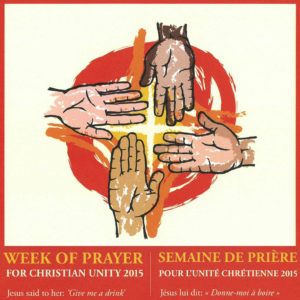 The Canadian Council of Churches is proud to offer a Canadian version of the Week of Prayer for Christian Unity materials each year, tailored for our cultural context. This year we asked you about how the Week of Prayer was being celebrated in your communities, and we were thrilled to receive so many responses.

People wrote from all across the country—not to mention a few from the US, and even one from India!—telling us why the Week of Prayer is important to their community. Christians of every stripe took time this January to come together and pray for the unity of the Church.

In Garson, Ontario (just east of Sudbury), Doreen Merkas has been coordinating the Week of Prayer service for over fifteen years. “What began as a centennial event here at St. John the Evangelist Catholic Church has been going on because the people of Garson, Falconbridge, and Skead have made it known it was meaningful to them,” says Merkas.

“At a parish council meeting in the fall of 1999, Fr. Charles Mathieu suggested we get involved in an ecumenical service with the other churches of the area.  The members had never heard of this and thought it was an excellent idea.  We agreed and I volunteered to call the pastors of the Anglican Church, First Baptist Church, French Catholic Church and Trinity United Church of Garson… What was to be a centennial project for January 2000 is still celebrated in January of every year.”

The 2015 WPCU service in Garson included around 100 attendees, a choir & musicians, and of course a fellowship time afterward.

In Sherbrooke, Quebec, Anglican, United Church, and Catholic congregations share a WPCU service each year. This year the Catholic parish, Église Précieux-Sang, hosted 150 people for the service, including Presbyterians, and Syriac Orthodox. Fr. Gilles Noël of Église Précieux-Sang and Rev. Samuel Dansokho of Plymouth Trinity United Church presided. See below for a highlight video of the service.

In Toronto, staff and students  of the Toronto School of Theology—the largest ecumenical centre for graduate theological education in Canada—held a mid-week service celebrating the Week of Prayer. Nicholas Forte and Hilary Keachie, both Master of Divinity students at Trinity College, helped organize the event.

“We all share one baptism, one faith,” says Forte. “Any chance Christians have to support each other in our common faith and in our unique expressions of it should be taken and celebrated to its fullest.”

The event, which took place in the Trinity College chapel, included over 150 worshipers from the various faith traditions of the TST—including first-time Coptic Orthodox participants. See more pictures of the TST service.

Watch a webcast of the full service here.

Did your church community celebrate the Week of Prayer for Christian Unity this year? We would love to hear about it! Please take a few moments to fill out our feedback form, and let us know how it went, and how we can improve our resources for next year.