The Canadian Council for Refugees (CCR), Amnesty International (AI) and the Canadian Council of Churches (CCC) announced today that they are launching a legal challenge of the designation of the United States as a safe third country for refugees.

“The US was never safe for all refugees, and is now even less safe,” said Loly Rico, President of the Canadian Council for Refugees. “It is wrong, morally and legally, to send claimants back to the US, knowing as we do that they may face serious violations of their basic rights.”

The three organizations are joining an individual litigant who is asking the Federal Court to strike down the Safe Third Country Agreement and allow her to make a refugee claim in Canada. E. is a Salvadoran woman who fled her country with her daughters after a decade of being targeted by a gang, including most recently death threats. She has strong reasons for believing that she might not be protected if forced to make her refugee claim in the US, rather than Canada.

“Our organizations have pressed repeatedly, expecting that Canada would move to suspend the Safe Third Country Agreement as regard for the rights of refugees has rapidly plummeted under the Trump Administration,” said Alex Neve, Secretary General of Amnesty International Canada. “To our astonishment and disappointment, however, the Canadian government continues to maintain that the US asylum system qualifies as safe. We are left with no choice but to turn to the courts to protect refugee rights.”

“Canada and the peoples living in the land of Canada have long welcomed refugees from all countries,” said The Rev. Dr. Karen Hamilton, General Secretary of The Canadian Council of Churches. “The Government of Canada has a responsibility to ensure that the human dignity of all persons is respected. So it is imperative that all who seek refuge in Canada are afforded the protections guaranteed to them under the Canadian Charter of Rights and Freedoms and international human rights treaties.”

The three organizations joined together to bring a legal challenge of the designation of the US as a safe third country shortly after the Safe Third Country Agreement came into effect in 2004. The Federal Court ruled that the US was indeed not safe for all refugees. This decision was set aside by the Federal Court of Appeal on technical grounds, without reviewing the actual situation in the US. The Supreme Court declined to hear the appeal.

The CCR and AI recently submitted to the government a 52-page brief, Contesting the Designation of the US as a Safe Third Country, which outlines the many ways that the US asylum system and immigration detention regime fail to meet required international and Canadian legal standards. It highlights how law and practice have deteriorated further since President Donald Trump took office. Unfortunately the Canadian government’s response was to maintain the position that there is no need to revisit the Agreement.

Under the Safe Third Country Agreement refugees who present themselves at a Canada-US border post seeking to make a refugee claim in Canada are, with limited exceptions, denied access to the Canadian refugee system and immediately returned to the United States.

Read the report, Contesting the Designation of the US as a Safe Third Country 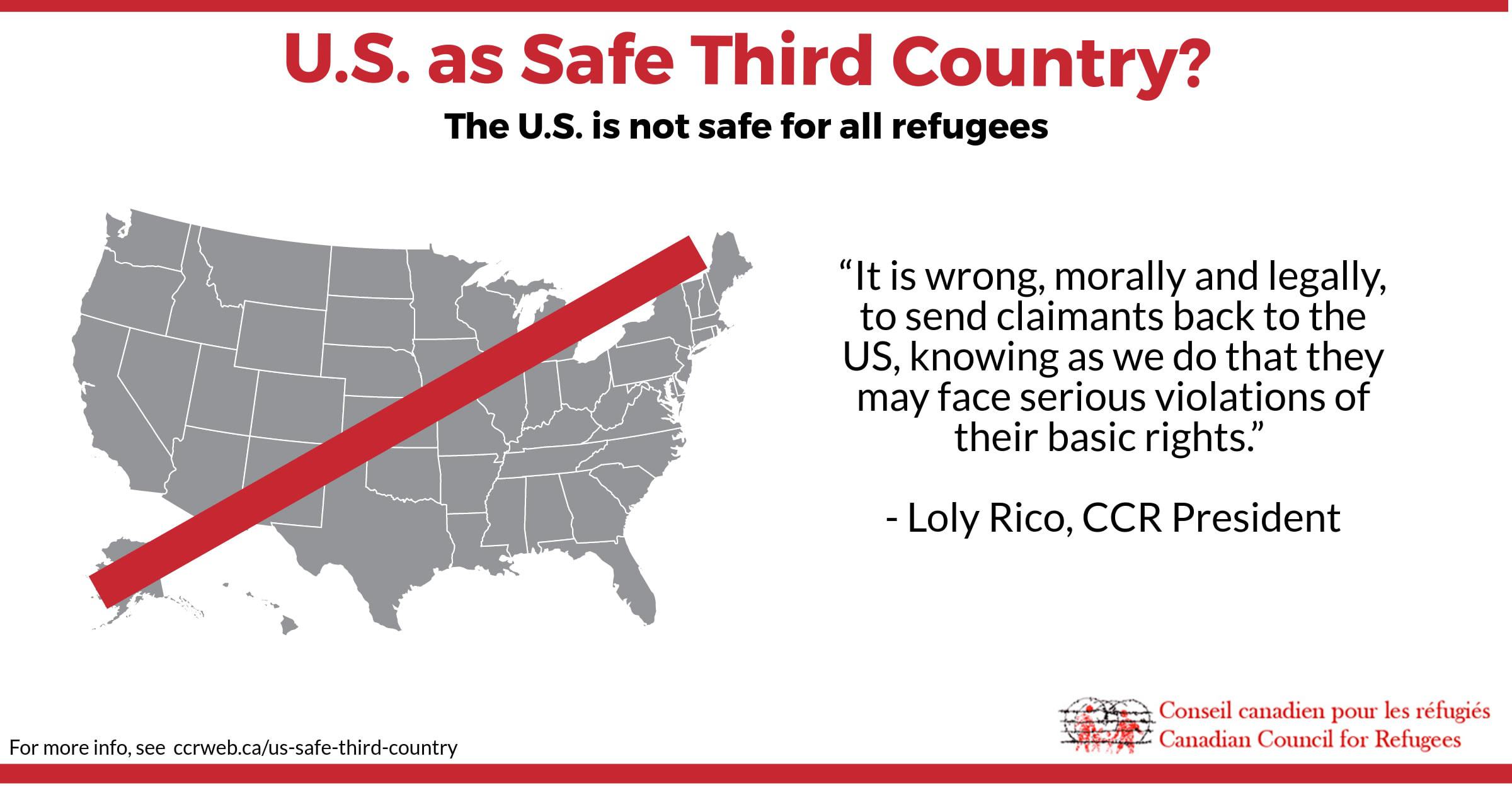